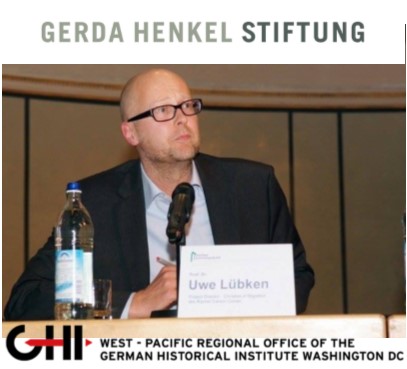 Abstract: Current debates about "climate refugees" have triggered interest in the larger connections between environmental change and migration. But what can history contribute to this new field of research?

Focusing on historical case studies of environmental migration in general and displacement after natural disasters in particular, Uwe Lübken’s talk will highlight the potential of historical research for this debate

Bio: Uwe Lübken is professor of American history at Ludwig-Maximilians-University, Munich. He has held teaching and research positions at the universities of Cologne, Munich, Münster and at the German Historical Institute in Washington, DC. His publications include a prize-winning book on the U.S. perception of the National Socialist threat to Latin America and several edited volumes, special issues, and articles on (American) transnational history and the history of natural hazards and catastrophes. He has published a history of flooding of the Ohio River (2014) and co-edited volumes on urban fires (University of Wisconsin Press, 2012), the management of natural resources (Berghahn Books, 2014) and city-river relations (Pittsburgh University Press, 2016). His current work explores the intersections of mobilities and the environment.

This lecture is part of the Gerda Henkel Lecture Series, organized by GHI West, the Pacific Regional Office of the Germany Historical Institute, Washington DC, in cooperation with the Gerda Henkel Foundation. The program brings German historians to the West Coast where they present their research at up to four different universities with the goal to facilitate the general dialogue between German historians and their colleagues in the U.S. and Canadian west.