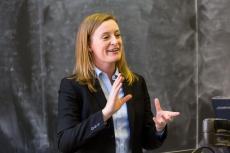 Dr. Susan Hyde, Professor of Political Science at the University of California, Berkley

"The Micro-Level Consequences of Democracy Promotion: A Field Experiment in Rural Cambodia"

Since the early 1990s, efforts to promote democracy throughout the world have proliferated, yet as many scholars and policy-makers lament, the effects of these democracy promotion programs are poorly understood. This article presents a randomized field experiment of a “real” democracy promotion program undertaken by a prominent international nongovernmental organization in Cambodia. We show that exposure to multi-party town hall meetings has positive effects on citizen knowledge about politics, attitudes towards democracy, and reported political behavior, but has null effects on citizen confidence in the political process. Several months after each intervention, qualitative evidence suggests that problem issues in treatment villages were more likely to be addressed than in control villages. Additionally, results from an election more than a year after the final intervention suggest longer term changes in voting behavior.

About Dr. Hyde: Susan D. Hyde is Professor of Political Science at University of California, Berkeley. She studies international influences on domestic politics, with a focus on the developing world. She teaches classes in international relations and comparative politics, including undergraduate courses on International Organizations and The Global Spread of Elections; and graduate level courses on Democracy Promotion: Theory and Practice and Non-State Actors in World Politics.