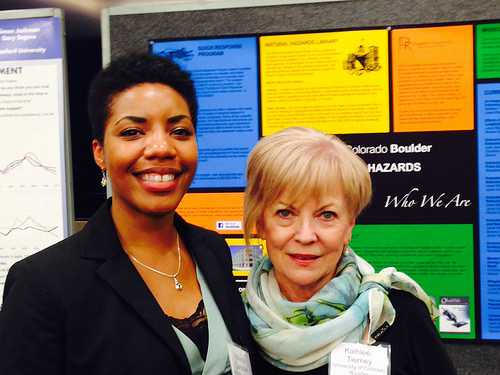 Kathleen Tierney and Nnenia Campbell presented their research at the 21st Annual Coalition for National Science Funding (CNSF) Exhibition and Reception on Capitol Hill in Washington, DC, April 29, 2015.  The Natural Hazards Center was selected by the Office of the Vice Provost for Research to travel to Washington DC to represent CU at the annual exhibition and reception sponsored by the Coalition for National Science Funding, a group that works to promote and sustain funding for federally sponsored science research, especially research that is funded by the National Science Foundation. As part of the CNSF event, Kathleen and Nnenia spent an afternoon on Capitol Hill and met with staff in the offices of Senators Michael Bennett and Cory Gardner and Representatives Jared Polis and Ed Perlmutter. They then hosted a booth at the Capitol Hill CNSF reception, which was attended by a number of representatives from funding agencies such as NSF, NASA, and the Department of Energy, representatives from professional associations such as ASA and the Coalition of Social Science Associations (COSSA), as well as Congressional staffers from House and Senate committees that approve and appropriate budgets for science research and some members of Congress. A major focus of their discussions on the Hill and at the NCSF reception was proposed cuts to social science research at the National Science Foundation, where the Republican budget would reduce funding for NSF's Social, Behavioral, and Economic Sciences Directorate by 45%. They also expressed opposition to proposed Republican budget cuts to scientific programs focusing on climate change.