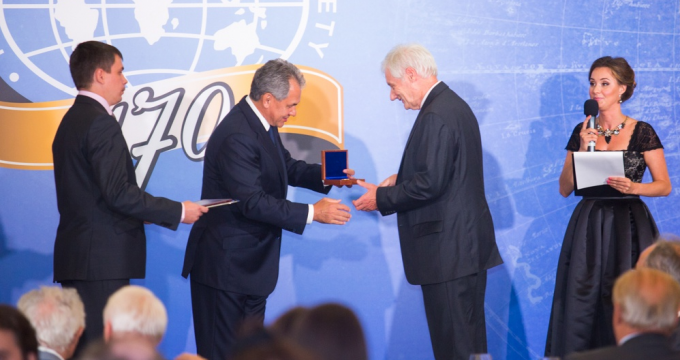 John O’Loughlin, CU-Boulder professor of geography and faculty associate in the Institute of Behavioral Science, has become the first foreigner in more than 100 years to win the Semenov-Tyan-Shansky gold medal for research on Russia.

It is the highest research award of the Russian Geographical Society typically targeted toward Russian and, previously, Soviet scholars working in the area of the former Soviet Union.

“This honor is an unusual one because of the political sensitivities between the U.S. and Russia right now,” said O’Loughlin, whose research in 2014 was featured in a New York Times article.

"This very much goes against what a lot of people think is happening in Russia, of increased control and isolation.”

O’Loughlin studies the political geography of the former Soviet Union including post-conflict relations among different ethnic groups in the north and south Caucasus Mountain region and de facto, or separatist, states.

“It’s very much field-based research on ordinary people living in these war zones and what they think and what their lives are now like,” said O’Loughlin.

Supported by continuous finding from the National Science Foundation, key to his 25-year body of work is the collaboration he’s been able to cultivate with Russian scholars. He also thinks it’s part of why he won the medal.

“I think it’s a signal that they don’t want to put off contact with foreign researchers and according to the president of the society, they want to encourage collaboration with foreign scholars,” said O’Loughlin. “This very much goes against what a lot of people think is happening in Russia, of increased control and isolation.”

The Semenov medal was personally presented to O’Loughlin by Sergey Shoigu, president of the society, at a formal banquet in honor of the 170th anniversary of the Russian Geographical Society in Moscow in late August.

“I actually was quite surprised by this whole thing,” O’Loughlin said.

Elizabeth Lock is an editor at the CU Office of News Services.